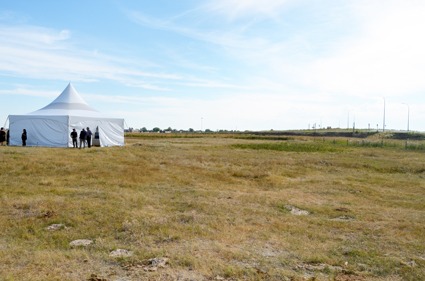 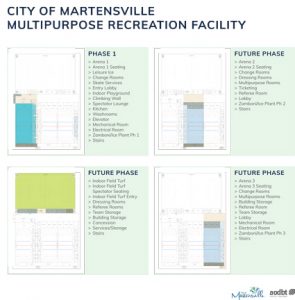 Six years ago a group of community members decided that they wanted to come together to help create the possibility of another much-needed ice surface in Martensville. What has been accomplished since then is nothing short of incredible.

The Martensville Community Recreation Project (MCRP) have held countless fundraisers over the years and gained a lot of ground when it comes to making this dream a reality. On Wednesday, August 19th, their goal moved one step closer towards the finish line when the location for the new multi-purpose recreational centre was announced.

The new addition to Martensville will be located across the overpass on the other side of Highway 12. This location will be a part of a new development planned for Martensville called Trilogy Ranch, a 680 acre subdivision, which will be created in partnership between North Prairie Developments (NPD) and Canwest Commercial and Land Corporation (CCLC). The land that will be used for the recreation centre consists of five acres gifted to the City of Martensville.

“I think the nice thing about this location is that it is accessible not just for Martensville, who really needs it, but for the people in the surrounding areas as well. To have a facility of that stature out there once it is fully completed will serve not just our community, but our province as a whole,” MCRP Chairperson Jesse Reis said.

For the MCRP, this was a huge step, as they were a big part of getting the wheels in motion with community support. “This project has been a collective effort from so many people; the City of Martensville, Council, businesses, community members, and everyone that supports our events. It is huge in a couple ways for us because it brings us one step closer to the ultimate goal and we can see the reality of it, but also, as we go out to get support from businesses and community members, there is something tangible that they can see now. I think that will be huge for us going forward,” Reis added.

Since 2014, the MCRP has raised over $350,000 that will all be used towards the construction of the new recreation facility. Reis said, “All of the events that we have held push for a larger goal of the rink, but coming together as a community is what I am most proud of and now that we are one step closer, it is that much more exciting. The more opportunities that we have for people coming out here; the better it is for business, for growth and it just makes this great place even greater.”

Investing in Martensville is not a new thing for North Prairie Developments (NPD), as they have been a big part of Martensville’s development for over 20 years, contributing to some of the major areas within the city such as Black Iron Crossing, McCormack Ranch, Sunset Ridge and others. According to John Williams, President of NPD and President/CEO of CCLC, when they first began developing in Martensville, the population was only 3,500, a far cry from the approximate 10,000 plus that it currently sits at.

Trilogy Ranch has been in the works for the past seven years, and is now ready to move to the next level. “The City of Martensville was looking for a site for the recreation centre and recreation mixes really well with retail. We have 83 acres of retail land in that subdivision so it will be a great mix and work very well for everyone,” Williams said. The space that is being donated to the City of Martensville will take into account for all phases of the new recreational facility; planning for the future additions that will be taking place, as well as parking.

The new subdivision will include the 80 acres set aside for retail and recreation, along with 600 acres for residential, which in time, will house over 10,000 people. Although there are still a number of approvals that are required before their development begins, Williams is excited that Martensville will be moving forward with the recreation facility.

Additionally, Williams looks forward to the economic input that this development will have for the region. “We are looking at about a billion and a half dollars of economic input, not to mention that there will be approximately 500 new jobs for the retail and hospitality sector over the long term. In the spirit of P4G and regional cooperation in the area, the economic spinoff will be very significant,” Williams added.

Martensville Mayor Kent Muench acknowledged the contribution of the MCRP and their years of dedication to this project. “I don’t know if they realized when they picked the name ‘Martensville Community Recreation Project”, that this really is a community project and needed so many people to make this happen. This is a game changing opportunity to bolster amateur sport and further Martensville’s vision moving forward,” Muench said.

Muench added that without this donation of land from NPD and CLDC, they would not be where they are today with this project, noting that this is the largest gift that the community has ever received. “This goes to show that they are in for the long term. They don’t have to give this to the community, but by their incredible donation, it shows that this is going to be a great neighborhood and that they are looking at helping to create a Martensville that is not just bigger, but definitely better and I think that is something residents of current Martensville can find comforting,” Muench stated.

The demands on the current sports centre are something that many local families are familiar with, so this new addition to the community will be a much needed relief to the sports organizations within the area. “This is not just a Martensville thing. Having that location central for the region, providing great access, plus the plan for the neighborhood being a large area, with commercial space around it; it becomes a great regional draw,” Muench said. “It is a great feeling that we have accomplished this. We are just little Martensville, but having all of these people come together to create something so amazing, that’s the thing I am most proud of.”

Schools Out at the MAP

Business Expo Returns To The Map

Beautification Committee Gets a Helping Hand From...