Members Petition to Have Directors Removed From Saskatoon Co-op Board 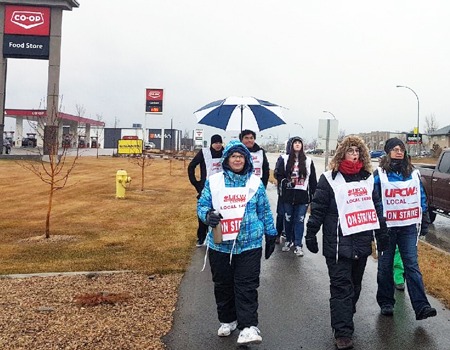 Workers at Saskatoon Co-op locations continue their strike as negotiations between the United Food and Commercial Workers (UFCW) 1400 and the grocery store chain have yet to be settled. The main hurdle in communications lies within Saskatoon Co-op’s plan to initiate a two-tier wage system for new hires, which the union states will lower wages for women and vulnerable members of society.

As of November 1st, more than 900 workers took to the picket line at Saskatoon Co-op food, gas, liquor stores, Agro Centre and home centre locations within Saskatoon, Martensville, Warman, Colonsay and Watrous. Members of the UFCW Local 1400 met with Saskatoon Co-op officials on Friday, November 2nd; however, no agreement was made.

The release continued to state that adjusted wage scales for new employees are common in the retail industry and that this structure has been used for many years by Saskatoon Co-op’s competitors, many of which are also represented by UFCW Local 1400. According to the release, the proposed wage for new employees is considerably higher than competitor’s wages and there is gender pay equality.

Noting that staffing consumes 60 per cent of expenses, there is a need to control operating costs in order to be competitive and ensure their longevity. Saskatoon Co-op is one of over 170 businesses that are a part of Federated Co-operatives Limited (FCL). “People might see some big numbers coming from FCL and attribute them to Saskatoon Co-op, but our revenues are not FCL’s revenues,” said Wicks. “Saskatoon Co-op is owned and governed by members in our local community and any profits generated are returned to members and the community.”

In response to the release from Saskatoon Co-op, UFCW 1400 states that they did not walk away from the proposed offer and that the employees’ bargaining committee considered the offer and responded by providing the Co-op with alternate proposals. “Co-op had no answer as to why they are offering our new employees $1.67 less than they are paying the new employees at Circle Park Co-op.”

The Co-op grocery store and gas bar located at Circle Drive and 8th Street has not been affected by the strike, as the workers at that location are represented by the Retail, Wholesale and Department Store Union.
Currently, members of the Saskatoon Co-op are collecting signatures to petition to have the current directors removed from their positions and have new ones replace them. A Facebook page called ‘Saskatoon Co-op Members For The Fair Treatment Of Employees’ has been created and a minimum of 300 signatures are required on the petition in order to request a meeting with the board to have a vote on removing and replacing the nine directors.

During the strike, Saskatoon Co-op locations will remain open. To find out about hours for each location, visit www.saskatoonco-op.crs.

Schutz Sees Much Success Both On and...

Much to Offer at the Martensville Information...

How to Prevent Foxtails in Furry Family...

Serving Customers Better With a No Questions...